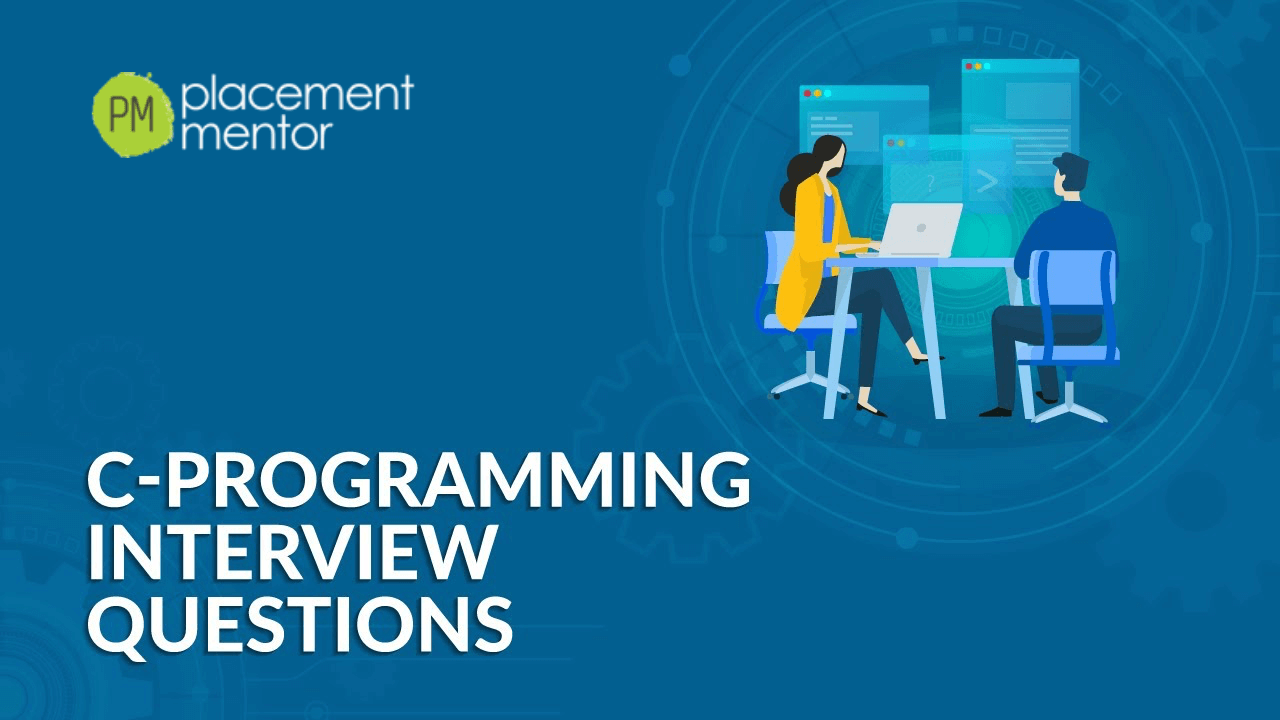 Ans. (First, in a line explain Increment and Decrement operators then answer the question)

Increment and Decrement operators are used to increase or decrease the value of the variable by 1. We can achieve this functionality by using  '+' and '-' operators. For eg:

(Such example will show your understanding of post and pre, increment/decrement also)

Q2. How will you print “Hello World” without using semicolon even once in your code?

Ans. (Simply write the below code and explain it’s working)

printf() function will print “Hello World” to the console. It will return a non-zero value to if statement and there is no other code to execute.

(Interesting fact: printf returns the number of characters(including space) inside the inverted quotes. For the above example, it will return 11.)

Q3. Do you know how many places a variable can be declared in C? If you do, then mention the places and the type of variable corresponding to that place.

Ans. (Name all the 3 places where the variables can be declared)

Variables can be declared in 3 places:

These positions correspond to

(Interesting fact: After defining a local variable, the system or the compiler won't be initializing any value to it.

Global variables get initialized automatically by the compiler as and when defined based on datatype. int = 0, char = '', float = 0, double = 0 and pointer = Null)

Q5. Explain to me the concept of Null pointer. And if you can, shed some light on Dangling pointer as well.

Ans. If the pointer variable is not assigned any valid memory address then NULL can be used to initialize that pointer. (Conceptually, the NULL pointer doesn't point anywhere)

(Interesting fact: we have a void pointer as well. A pointer that points to some data location in storage, which doesn't have any specific type, so "void" pointer).

Dangling pointer: Pointer that doesn't point to a valid memory location. (Don't stop here it will give the interviewer a chance to confuse you, provide a detailed answer)

If you delete or deallocate a memory of an object without modifying the pointer pointing to it, in such cases dangling pointer arises.

Q6. In a C language, how many ways are there of passing arguments to a subroutine(function)?

Ans. In C language there are two ways that arguments can be passed to a subroutine.

(You can stop here, or you can also provide a simple Swap function example for Call by Reference)

Q7. Is there a way in C programming such that the local variables maintain their values between function calls?

(Sometimes a question is not asked directly, such as above question could be asked simply as - Explain use of static keyword in C language)

static Local Variables: When you apply the static modifier to a local variable, the compiler creates permanent storage for it, much as it creates storage for a global variable.

Q8. You can easily print numbers from 1 to 100 using a loop, can you do the same without using any type of loop?

Ans. (Use recursion instead loop)

Ans. (Interviewer is expecting an explanation of Preprocessor Directives)

#include - It is used to include libraries, which would depend on what functions are to be used in the program.

#define - It defines an identifier and a character sequence that will be substituted for the identifier each time it is encountered in the source file. The identifier is referred to as a macro name and the replacement process as macro replacement.

(Interesting fact: Each preprocessing directive must be on its own line. For example, this will not work -> #include <stdio.h> #include<stdlib.h> )

Ans. Stack Area: It is used to store local variables and is used for passing arguments to the functions along with the return address of the instruction which is to be executed after the function call is over. These values stay in the memory only till the termination of that function.

Q12. In which memory segment of the C program, static variables are stored?

Ans. (There are two cases here, explain both to the interviewer)

Q13. What functions are used for dynamic memory allocation in C language?

Q15. Explain all the types of recursion.

(Interesting fact: Recursion can also be divided into Direct and Indirect Recursion based on the place where a recursive function is called.

Direct recursion – Function calls itself from within itself.

Q16. Write a program to swap two numbers without using the third variable?

Q19. Write a C program to check whether a number is Prime or not.

Q20. Write a program to check whether the number is prime or not using recursion.

Q21. Write a program to check whether a number is Palindrome number or not in C programming.

Q22. Write a program to print factorial (without recursion) in C programming.

Q24. Write a C program to check whether a number is Armstrong or not.

Q25. Write a C program to reverse an Integer.

Q26. Write a C program to find the sum of two integers without using '+' operator.

Q27. Write a C program to print “Hello World” with the double-quotes.

Q28. Write a C program to divide an integer by 2 without using ‘/’ operator.

Q29. Write a C program to reverse a String in C with the help of recursion.

Q30. Can the size of an array be declared at runtime in C?

Ans. No, in array declaration, the size must be known at compile time. You can’t specify a size that’s known only at runtime. The compiler needs to store memory for the array, and to do that compiler requires Array’s size at compile.

Q32. Write a C program to convert an integer into a string without using library function.

Q33. What is the difference between Macros and Functions?

Q34. How will you find the total number of elements in the array if the size of the array is not provided?

Ans. We will use “sizeof” operator to calculate number of elements in the array.

Q35. Do all character arrays end with “nul”() character in C?

Q36. Describe how arrays can be passed to a user-defined function.

Ans. We cannot pass an entire array in the form of arguments. Instead, while calling a function we pass the address of the first element of the array(name of the array) and in formal arguments, a pointer is used to point to this address.

Q37.  What are self-referential structures? Are they possible in C?

Ans. Self-referential structures are those structures that have one or more pointers which point to the same type of structure, as their member.

Q38. What are the different ways to access structure members in C?

Ans. They are two operators using which we can access structure members

Difference between them is in the case of pointers.

Now accessing elements with the help of ‘a’ is straight forward- a.i and a.j

But using ‘p’ is tricky. (*p.i) if we right like this, then precedence and associativity will arrive in the picture. Compiler will read (*p.i) as (*(p.i)) which is wrong, so you need to manage parenthesis as well, i.e. right correctly ((*p).i), so to reduce programming errors (->) operator is provided in case of pointers. Using arrow operators we can simply write

Q39. What is the main advantage of using Structures in C?

Ans. Structures can store heterogeneous type of data under a single name. Unlike arrays, we can store int, float, char any type of data inside structures and then access and manipulate this data.

Q40. What are the advantages and disadvantages of storing data in the heap area?

Ans. There are four storage class specifiers in C

These specifiers tell the compiler how to store the subsequent variable. The general form of a variable declaration that uses a storage class is:

At most one storage class specifier may be given in a declaration.

(Detailed explanation in the next question)

Q44. If storage classes are responsible for scope and memory storage of variable, then why don’t we normally write them with each variable in the code?

Ans. Default rules that are used if no storage class specifier is specified are:

Ans. No, it is not possible in C. It is always the most local variable that gets preference.

Q47. What is translation unit?

Q48. Find the maximum & minimum of two numbers in a single line without using any condition & loop.

Q50. What is the difference between an uninitialized pointer and a null pointer?